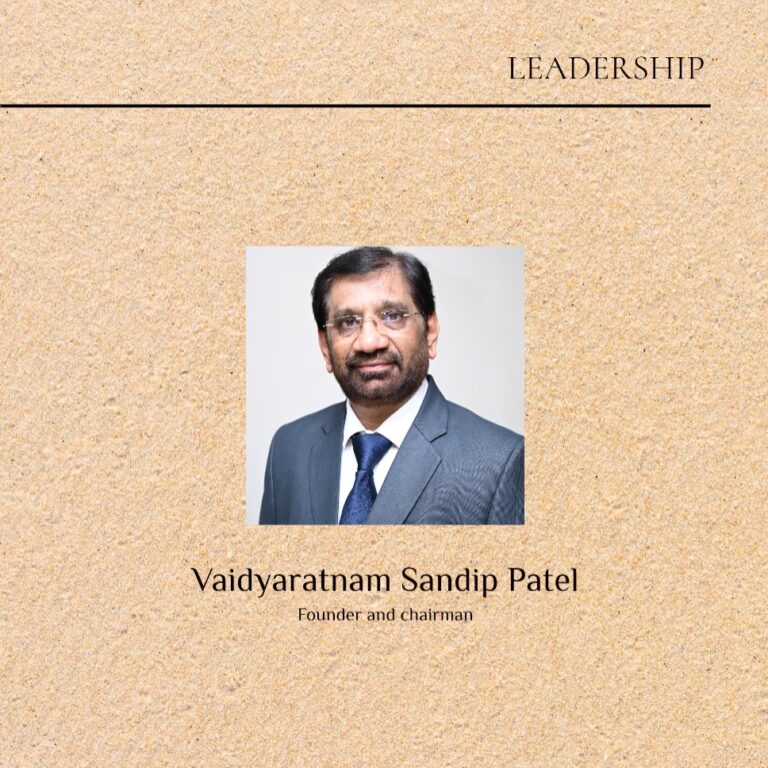 Vaidyaratnam Sandip Patel (Ayurved Vachaspati) B.A.M.S., M.D. (Ayu-Medicine – Kayichikitsa), Ph.D. Arthritic Disorder in Ayurvedic medicine and is an expert Ayurvedic physician practicing in a Diamond City Surat Gujarat, which is located in Western India. He has wide experience of over the 30 years in practice.

Vaidyaratnam Sandip Patel started his own Ayurvedic Pharma company along with his clinic in 1993 in the name of Ayursun Pharma Company. The name got popular among masses and soon there were many products under this brand. Slowly there were Niramay Ayurvedic Hospitals franchisee opening up in various cities around the world with trained ayurvedic experts handling the patients and doing proper panchakarma treatments.

He is a B.A.M.S. Graduate from Guajrat Ayurved University Jamnagar 1989. He immediately joined Diploma Naturopath (ND) at Nasik, Maharastra, India.

After completing ND at Nasik, in 1992, he also joined Post Graduate Panchkarma Course Institute at Ayurved Mahavidhayalay, Akola, Maharastra, under guidance of Dr. P.Yadaiah (A Very renowned Panchkarma Specialist of India). Also he was Under Traning & Research with Dr. U. S. Nigam, Ujjain.

After completing Panchkarma training in 1994, he immediately started his own Reserch Hospital and Ayurvedic Panchkarma Center at the Heart of Diamond City of Surat (Gujrat) India.

He is Re-search and work with Many tradional Vaidya’s Indian as well as overseas vaidya’s During the he has studied Certificate Specialized Re-search course of Ayurveda from Six Months at Kottakkal Arya Vaidya Sala kerala in 1996. He is invited by various Ayurvedic organizations, Ayurvedic Hospital, Super speciality hospital and Re-search institute. Attends conferences worldwide for seminars, workshops, Ayurvedic consultations, lectures, patient examinations and diagnosis and treatments.

After that he has started his own Reserch Unit – Pharmacy named Ayursun Pharma, in Surat Dist., Gujrat, India in 1999.